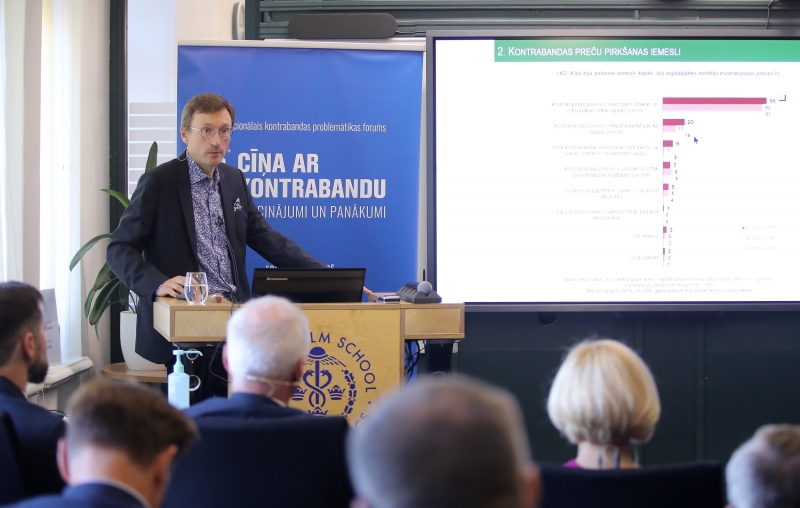 Studies show that people in Latvia are still tolerant towards buying smuggled goods and this tolerance has even grown during the last year. Almost one third or 32% of the surveyed Latvians do not consider the purchase of smuggled goods as condemnable.

This indicator had decreased significantly in recent years - in 2019, 26% of respondents, but last year 28% did not consider the purchase of smuggled goods to be condemned. Experts explain this by the general public mood affected by COVID-19 pandemic. According to expert estimates, in total due to smuggling, the Latvian state budget loses around 100 million euros a year.

Tax experts emphasize that the volume of smuggled excisable goods is directly linked to tax policy – although it is an effective tool for regulating the consumption of excisable goods, a number of factors need to be taken into account when setting tax rates, such as the prices of these goods in neighbouring countries (affected by national tax policies), the purchasing power of citizens, anti-smuggling law enforcement agencies, and their capacity.

Experts also point out that decision-makers need to reach a balance between economic aspects and human health, and that any tax increase should be gradual and balanced, complemented by anti-smuggling measures and taking into account the experience of neighbouring countries.

“Smuggling rates are still influenced by three interacting factors – public attitudes and willingness to buy these products, tax policy and restrictions, as well as capacity and quality of work of law enforcement bodies. Public opinion poll results, current smuggling indicators and research of tax experts show that smuggling as a manifestation of the shadow economy is and will be a topical problem in Latvia also in the coming years. We see that an unbalanced tax policy between different products does not have the desired effect on either public health or tax revenue objectives. Therefore, a well-considered and balanced tax policy and cooperation between the various law enforcement agencies that fight organized crime, the shadow economy and the movement of illegal excise goods is critical if we want to improve the situation,” Juris Stinka, a board member of BASE (Business Against Shadow Economy), emphasises.

The main motivation for buying smuggled goods is still their price. Of those respondents who have bought smuggled goods last year, as many as 96% say they do so because smuggled goods are significantly cheaper than legal ones, and 20% say they are as good as legal.

However, what is interesting - 9% of respondents indicate that smuggled goods are purchased in spite of the state, so that the state does not receive money in taxes. Last year, only 1% of respondents had such motivation.

The fact that the purchase of smuggled goods is profitable is confirmed by the savings indicated by the respondents – 16% of those who have bought smuggled goods last month indicate that they have saved up to 19 euros, 29% of smugglers have saved 20-50 euros, and 14% – even more than 50 euros the last month.

According to the experts of the 3rd National Forum on Smuggling, the volume of smuggled excisable goods is directly linked to the tax policy implemented in the country. The experience of EU countries shows that the increase in excise duty and, consequently, the increase in the price of a product stimulates consumers to engage in cross-border trade, buy a product on the illegal market or switch to cheaper substitutes.  As a result, an increase in the rate of excise duty may lead to a smaller decrease in consumption than initially planned, or even increase and further overconsumption (because of consumers building up stocks in cross-border shops, which may lead to overconsumption) and may not have a positive effect on the population. health status.

Unless the tax increase is accompanied by anti-smuggling measures, the impact of the tax on consumption could be neutral or even negative for the state budget, but the actual consumption of excisable goods will not decrease as a result.

A similar situation arises with so-called smokeless or alternative products. In Latvia, it was found out in 2019 using the top-down method that almost 32% of all e-cigarettes bought in the country are bought on illegal market. Meanwhile, as many as 50% of tobacco-free nicotine pads are purchased legally online (outside Latvia), but about 20% are illegally bought or imported into the country.

The fact that excisable  smuggling is a European problem is confirmed by an independent annual study by the international auditing company KPMG on the volume of cigarette smuggling in Europe. In 2020, the consumption of smuggled and counterfeit cigarettes in Latvia has risen sharply again, increasing by 5% and reaching 19.1% of the total market. This was the second highest increase in the whole of the European Union – the sales of illegal cigarettes grew faster only in France (by 9.4%). Consequently, Latvia's annual losses from unpaid taxes due to cigarette smuggling and counterfeiting amount to approximately 59 million euros, which is by 19 M euros more than in 2019.

Belarus has historically been the largest country of origin for smuggled cigarettes imported into Latvia. Accordingly, in 2020, 291 million cigarettes or 67% of the total volume of smuggled goods came from Belarus. The main reason for the flow of smuggling is the significant differences in cigarette prices. The most popular cigarette brands that were smuggled into Latvia are NZ, Premier and Camel.

In Europe as a whole, consumption of illegal cigarettes (smuggling and counterfeiting) increased by 0.5% in 2020 to 7.8% of total consumption, and the total loss of uncollected taxes to European budgets is estimated at 8.5 billion euros. In addition, the study shows that the consumption of counterfeit cigarettes in Europe continues to grow rapidly, by 87% to 10.3 billion units, the highest in history.

According to researchers' estimates, the volumes of illegal production of counterfeit cigarettes in the country have increased at the same time, reaching 1.8% of the total volume of cigarettes consumed in Latvia. In total, the revenue not included in the state budget during this year because of smuggling and trade in illegal cigarettes could be at least 38 million euros.

3. The National Smuggling Forum “Fighting Smuggling - Challenges and Success” is organized by BASE and SSE Riga in cooperation with the research centre SKDS.